The first church on this site was a corrugated-iron chapel, dedicated to St. Chad. It was blessed on 2nd October 1904. The first resident priest, Fr. Peter Pears, replaced it with the present church which was opened on 15th February 1931. It was consecrated on 18th February 1981 by Bishop John Brewer, Auxiliary Bishop of Shrewsbury. The old chapel continued in use as a Parish hall until the early 1980’s, when the present hall was built. The church is in the North Italian Romanesque style. The altar is a copy of an 6th century carved slab of marble in the Church of Sant’Appollinare Nuovo in Ravenna.

St. Chad’s Parish began as a Mass Centre served from Edgeley. Mass was first celebrated in 1900 in a private chapel at Cheadle Old Hall which stood between Cheadle Institute and what is now Queens Gardens. Fr. Abram, the priest at Edgeley, purchased an area of open ground on Stockport Road between Bank Street and Jackson Street. A corrugated iron chapel was constructed on the site as a Chapel of Ease, dedicated to St. Chad. It was blessed on 2nd October 1904 and was served by the priest at Our Lady’s Edgeley – first Fr. Abram and then Fr. McGreever.

In 1928 Fr. Peter Lancelot Pears was appointed to Cheadle as the first resident priest. He quickly realised that a new church was needed to house the growing congregation. Bishop Hugh Singleton laid the foundation stone on 24th August 1930, and the church was completed and opened on 15th February 1931. At the same time Fr. Pears built a presbytery beside the church and he lived there until he left the parish in 1938.

He was replaced by Father (later Canon) Howe. He came to Cheadle from Our Lady’s, Stockport, and it was through his efforts that the debt on the parish was cleared. He began to celebrate Mass on Sundays at the King’s Hall, Cheadle Hulme and once a month at the Heald Green Hotel. As these communities developed, two new parishes were formed, each with their own church. In 1952 Canon Howe left St. Chad’s to become the first parish priest of St. Ann’s, Cheadle Hulme. 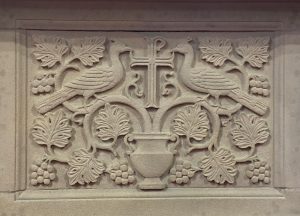 Canon Howe was succeeded by Fr. Bernard Houghton. Fr. Houghton stayed for almost thirty years and it fell to him to implement the enormous changes brought about by the Second Vatican Council. In order for the altar to be brought forward so that Mass could be celebrated facing the people, the baldacchino had to be removed. The enthusiastic and proficient choir needed an ancient and failing harmonium to be replaced by a single manual organ in 1960. It was upgraded to two manuals in 1979. Fr. Houghton paid off the final debt on the church and so the way was clear for it to be consecrated by Bishop John Brewer on 18th February 1981, just six months before Fr. Houghton retired. Only days after he had left, he suffered a heart attack and died.

Fr. Peter Morgan replaced Fr. Houghton and continued to implement the changes of Vatican II. To encourage the participation of the whole congregation in the liturgy he brought the choir down from the loft into the main body of the church. The old iron church had been used as a parish hall since 1931, but it had passed its sell-by date and it was decided to build a new hall in front of the presbytery. Fr. Morgan left in 1984 shortly before the new hall was opened.

His successor was Fr. Jim Robinson. He continued to build up the parish, particularly its spiritual life, over the next four years. He was replaced in 1988 by Fr. Frank Rice. He oversaw the painting of the interior of the church where the bare brick had become dark and discoloured. In 1997 Fr. Danny Canning replaced Fr. Rice. He oversaw the celebration of the 75th anniversary of the church early in 2006, not long before he left. He had also arranged for a completely new heating system for the church, but he had gone before it was installed. In the summer of 2006 Fr. Danny retired to his native Derry. 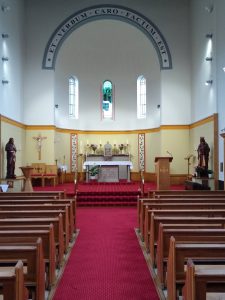 Fr. John arrived in September 2006 and he began an extensive programme of refurbishment in the church, the hall and the presbytery. A new sound system was installed in church, the floor was sanded and varnished, the sanctuary carpet was replaced, a whole matching set of furniture was installed in the sanctuary, personalised with the Cross of St. Chad. Meanwhile, the parish continued to develop as an active and welcoming community with many long-standing groups and organizations continuing to flourish as they do to this day. In 2007, Bishop Brian grouped the parishes of the Diocese into Local Pastoral Areas, so that parishes could co-operate more effectively with each other and share resources. St. Chad’s was linked again with its daughter churches, St. Ann’s and Christ Church.

Fr John retired in September 2019. For a few months St Chad’s was under the pastoral care of Christ Church Heald Green, until Fr Sean’s arrival in February 2020.  Fr Louis Charuvila Pappy arrived in February 2022.  In August 2022, it was announced that Fr Sean would be leaving St Chad’s to undertake a new mission to establish a Eucharistic Shrine for the diocese at St Joseph’s Stockport and that Fr Louis would become the new parochial administrator for St Chad’s and St Ann’s.

Permission to podcast/stream the music in this service is obtained from ONE LICENSE, License #P-400406.  All rights reserved.

St Chad’s is part of the Catholic Diocese of Shrewsbury (registered charity number 234025), comprising of the adjoining villages of Cheadle and Gatley.